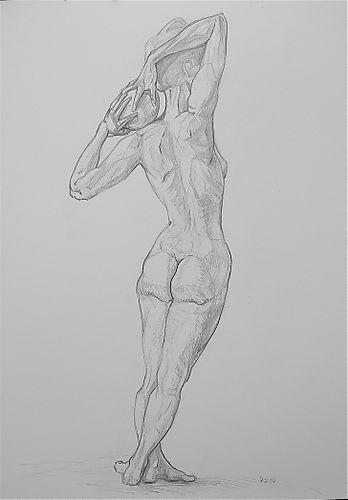 E_pencil
I’ve been looking at Robert Berverly Hale’s vid series from the 1980’s at the Art Student League, and picked up a few of his books on drawing from the Masters, and have wound down each day by knocking out a few studies. It is one thing to draw from a 2-D drawing of the masters with Mr. Hale’s help, and quite another to draw from life. Since models are scarce I’m working from my sculpture of Elizabeth, pushing the intellectual process a bit with anchor points, direction lines, major masses, to refine and adjust my understanding of anatomy in relation to creating a work with intuitive flow.

No internet for few weeks here, but some new things were created- and now it is getting too hot to work in the garage. I played around with laying plaster over a male aluminum figure (from my MFA) and pulling areas, along with pulling a plaster from the silicon mold
of the figure. Then I played around with introducing thin planar areas
and really just made a mess. But after all the retentive work of
pulling good figures, then centaur chickens…it was fun to get messy
for a bit.

I may come back to this process, but since then have purchased foam and a hot-wire to cut the foam. I intend to begin working at finding gesture, balance, and form that is derived from the figure- but as a direct carving process rather than playing with molds.

This links to a great video of Ron Mueck’s process.  It shows his pregnant woman from start to finish, and a few other works as well: mother and newborn, man in boat, swaddled infant. The raw talent is astounding. The process is seamless.
Ron’s works are all modeled figures- meaning he sculpts each figure. This is significant, as he is often lumped in with the likes of Duane Hanson- who pulled body castings from live models. In actuality Ron is aligned with the great masters of the figure spanning from Rodin back to Michelangelo. Rodin was accused of pulling body casts, as his contemporaries could not wrap their heads around his ability. Pulling body castings is what passes for figure sculpting in many art schools- and I promise not to compare art school art to Ron, as he didn’t go to art school. Thank goodness, or they might have convinced him to stack and glue found objects like the rest of academia.
I think a big part of the “Wow! factor” of Ron’s work may well be that the art-school world is built for anyone to be able to participate in the arts, and often forgets that there is real and living talent which surpasses the often vapid backslappings of the overinflated “art-world”.
HIs work is not a photo-reproduction of a certain model, but rather a product of his imagination balanced with nuances from the live model. Creating form from imagination in this manner is the way of the traditional masters of the figure-  and this is the big disconnect: for most figure artists who aspire to realism the conception of the figure requires a vast background of practice and understanding of the anatomy of the living figure. For most this is a lifelong struggle and investigation, and for some few it is a conception of the whole that surpasses a learned ability (although there is still a learning curve, just like anyone else, but the curve is accelerated)- it is a natural ability, understood by those with an appreciation of it as talent or Genius. The great Italian master Bernini had such raw talent (with the figure as well as in architecture) that his closest academic competitor killed himself. The lesson here could be that the art world is usually a business like any other- but built on a possibility of human genius that rarely manifests, and when it does is insurmountable, just as it should be.
With that said, it is important to know that Michelangelo gave up the ideal form in his later years, and said that works of his youth like the David and the Pieta misled people from where art begins within the artist, and cannot lead people to where art can live with the viewer. This allows that Genius in sculpting the human form is elusive and not about mere representation- as personified in Michelangelo’s last work, the Rondanini Pieta. Yet representation of the human context is essential, and Ron brings mastery of the human form back into the Post-Modern dialogue.

This will be the last Centaur Chicken I create for a bit. I have a few more in mind, but I have some new ideas going in a different direction. The Centaur figures have answered many technical concerns, laying a solid groundwork for media use. I will still be playing with existing molds of figures, but allowing the figure to act as a stepping off point for exploration.
The centaur figures don’t require the kind of creative attention and originality that generates a genuine motivation. By this I mean that they are a pre-existent idea that require a skilled process to create, but the process of creation does not significantly inform them or lead anywhere new: I know which figure and chicken will fuse well, which parts I’m putting where, and how it will turn out.  There is no risk of failure, no invention of necessity, no real interaction necessary- in other words, they are boring me. A good direction leads into the unknown and has inherent failures- risk and exploration inspire new ideas and new directions.