After the mucous dribble of layer one, layer two has a bit of dye added to warn when I’m nearing the skin/mucous later. Then a thicker silicon mix is used to create a 3/4 inch line around the figure as the mold seam that will be cut apart later, and undercuts are back-filled. Layer three is yellow sport mesh & silicon, and layer four smooths over the sport mesh.

A seam for the plaster mother-mold begins with mold keys made from wax dixie cups and tea-candle tins (circle punched into the dixie cup with a die-cut hole cutter) [Note to self: never ever use the tea light cups again because the plaster will not let it go and you will take next to forever incrementally wedging the mother mold apart. Idiot! Gosh!] Toothpicks pin the mold keys and hot glue takes up any slack between the mold and the dixie cup. Nothing sticks to silicon mold, ditto for waxed dixie cups- so the hot glue creates a seal and the toothpicks act as an anchor, but will pop away from the waxed cup easily. Delicate work that gains strength as it all comes together, but it always is a bit tenuous.

When the mold seam is finished, it makes a nice bisecting Halo. Next comes the plaster & hemp mothermold.

Big & Blue: mold 1
“Big and Blue” meets “The Tick vs The Uncommon Cold” 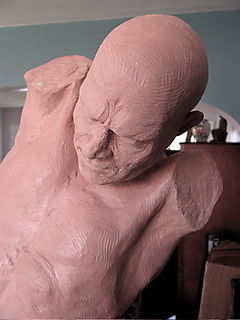 It took being on the verge of molding for me to finally get around to finishing the face. I had planned on having Peter sit for me for a few hours, but that was way back in Kansas. Bringing the figure back to life after it was bashed up and collapsing from the move left me considering just tearing it down. He came back to life, and in reengaging with the detail of his arms and hands, then some touch-up on the face- & I realized it had become a serious piece again that I needed to get back on board with. So yesterday I cut his face off and expanded the volume of his head, as it was teeny and odd. Then I worked on the face a bit and realized it was too long and I had to re-remove his face and shrink things back a bit. Before all this I found my disk of Peter and pulled up some images toward the end of the pose when the weight was beginning to wear on him. The expression on the prior face was serene and boyish- not what I was going for.

Peter: armless
The title is a bit of geekery referencing The Tick (animated). I suppose I could photoshop the figure to a nice blue and add some antennae as well; but I still have mesh to cut…The first step in prepping to mold a figure is cutting it apart. Always a bit of anxiety around that. Removing the arms allowed me to work his noggin and get around the hands. 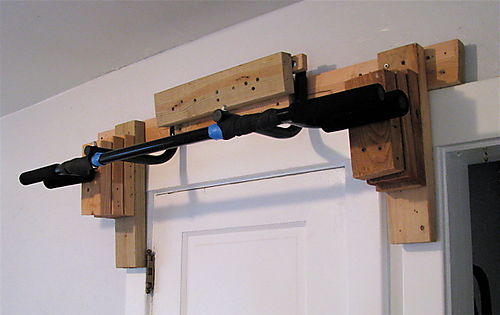 Chin-Up Bar
If “Home is where the heart is” and the heart is in the chest, then Home Improvement it is!
This is what happens when I am selected by majority vote for a $90,000 commission, and yet it goes to the other guy. I must be related to Al Gore. Instead of going on to win a Nobel Prize for telling people to change their light bulbs and buy a new car, I rig a pull-up bar. For all you muscleheads out there who’s bar doesn’t fit the old wide doorways of your dilapidated rental; this solution only put four screws into the walls- the rest is screwed to itself. None too pretty, but sturdy and cheap.
I now have no excuses for not re-booting my P90X Tony Horton workouts. I was so close to being on my way to edging toward a minimal level of buffness back in May, after more than two months of training 6 days a week. Today is the second day after the first day back at it (having skipped yesterday) and the soreness is surreal. In other news, my Bonneville Cutthroat commission from a few years back is well liked enough that the City wants another school of fish further up the stream/road. The new group will be in the median cresting the hill of a major intersection (2100 S and 1300 E). I dropped the molds off at the foundry and picked up some silicon mold for the 1/2 life size sculpture of Peter. It was damaged a little in the move, and the gesture permanently shifted- but after six hours on him a few days ago, and probably about the same again, he will be ready to mold!